First review of the Orion UAV

First public presentation of the new russian long range UAV Orion from Kronshadt Group was at first day of MAKS-2017 air show in Ramenskoye near Moscow. The new UAV was designed special for reconnaissance missions and surveillance of ground targets at operational-tactical range (250 km). The working time that the device can be around 24 hours. The range of the UAV is most likely limited by communication systems of complex.

We thinking that first flight of Orion UAV was in the 2016 and now this UAV is one of general program of military drones for RuAF.

Article about Orion UAV at MilitaryRussia.Ru is here

On June 26, 2017, the Zvezda TV channel published the full version of the video of double launchs of the 3M-30 Bulava missile's which took place on September 27, 2016. As you remember both of the missiles started properly but after a successful launch one of the missiles self-destructed (this if official information).

Last year we already discuss strange flight of second missile and now we can see all details of this failure - this video shows how and what happened. In general, at first I see that first-stage engine had some delay in the first seconds of flight. Second - later missile began to correct the trajectory of the flight and probably had some problems in the operation of the controlled nozzle of engine or the missile control system in general (at third). As a result the missile was destroed by an emergency rocket explosion system. 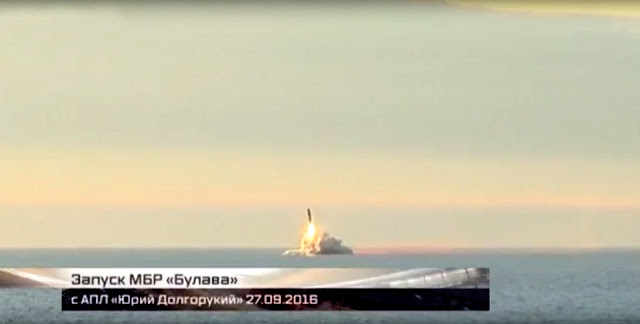 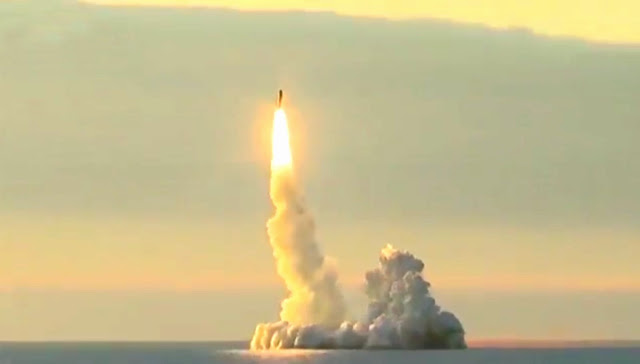 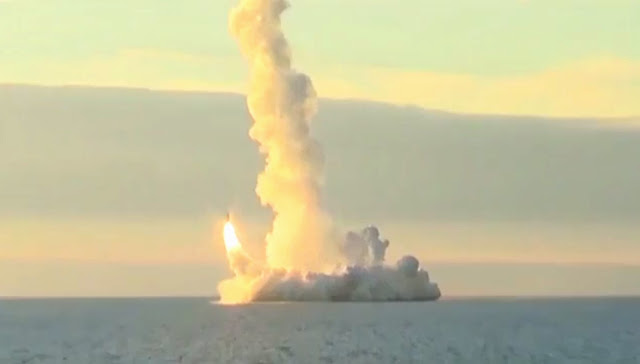 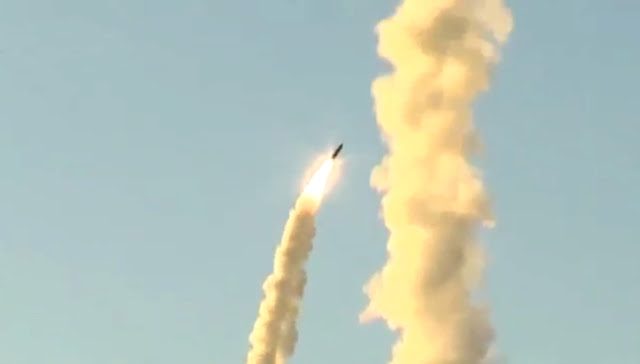 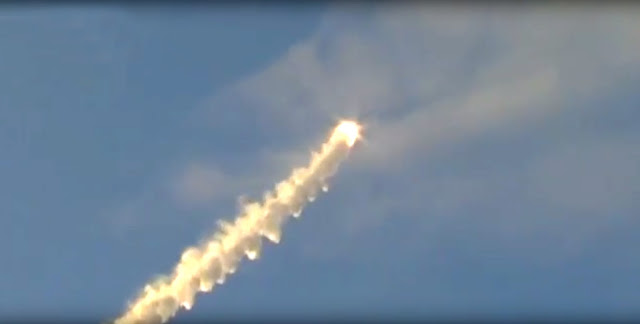 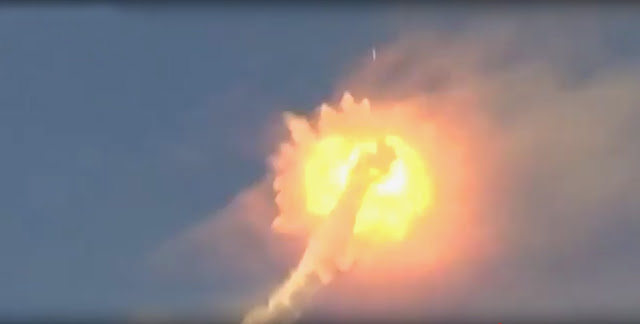 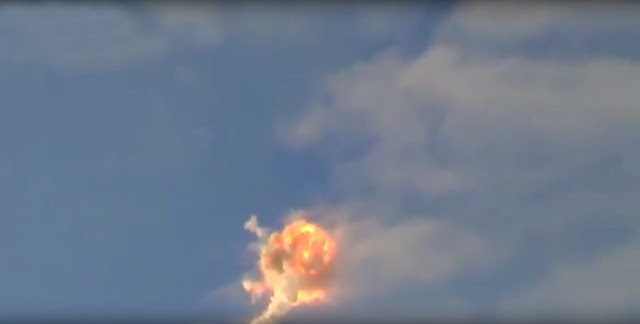 So, I decided that it's time to start discussing the device "object 4202" with images thereof. Let it be purely hypothetical. Of course everything that is written below is purely my personal opinion.

Ok! The object 4202 / 15Y71 is an aeroballistic object, which most of the way to the target moves along a low-attitude ballistic trajectory in a conditionally airless space. In the process of this movement the device stabilizes and can probably even correct the trajectory using manoverable engines. Like a satellites or upper stages of traditional ICBMs. Stabilization of the device is also required to provide the angle of entry into the atmosphere and for the operation of correction guidance systems. It is likely that the device can use guidance on the map of the terrain with a comparison of the reference map of the terrain with a radar image. It is also possible that this is a side-scan radar.

When approaching the target for a distance of about 200-300 km (I think that maybe 500 km, but hardly more), the device goes to atmospheric flight. Accordingly, by the time of the beginning of the atmospheric part of the flight, the apparatus has a hypersonic speed of about 14-15M, which is gradually decreasing. I think that the device is NOT equipped with a hypersonic engine. Maneuvering on the atmospheric part of the flight is carried out with the help of aerodynamic rudders. When the flight speed is reduced to values ​​of the order of 8M (or may be less) I think that vevicle can use the radar homing. Before that the device can perform programmable maneuvering in order to counter the ABM.

Several words about the power of a probable nuclear warhead. I have two opposite ideas. First, the device is too expensive and will be used for very important aims and accordingly the charge should be powerful and use megaton class warheads. The second, the device must be high-precision, and therefore even a charge of 150 kt can destruct any aim.

And new artist impression of 4202 object from me... 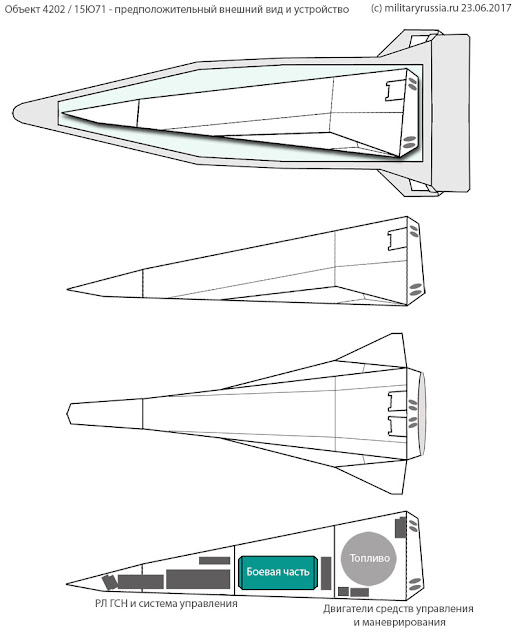 
In the last days of May or June 1, 2017 in Tajikistan, as the part of the regular exercises, an incomplete battery of the 9K720 Iskander-M missile complex was deployed with at least one combat ballistic missile of the same type that we first saw in autumn 2016 on the test launch from the Kapustin Yar test site. 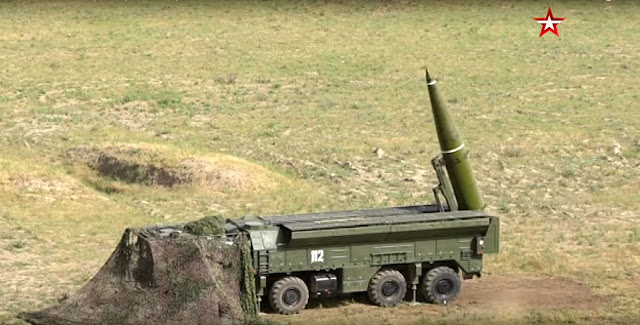 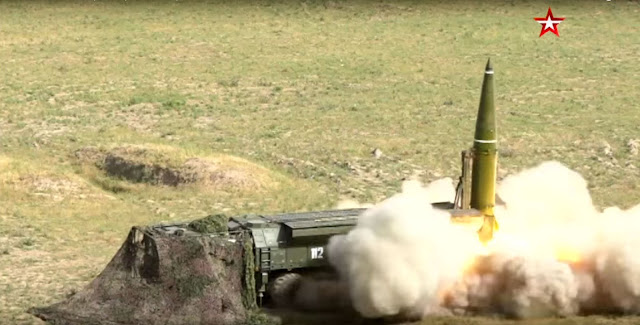 This is new version of the 9M723 ballistic missile is probably adopted. I think that we see a missile with a high-explosive warhead, possibly penetrating. This is not confirmed by anything, but if such a warhead was, then it is likely that it would look similar to what we see. Also, of course, it is possible that we have a mock-up of the nuclear warhead. Demonstrations of such a missile to Western military specialists may have their own logic as PR. 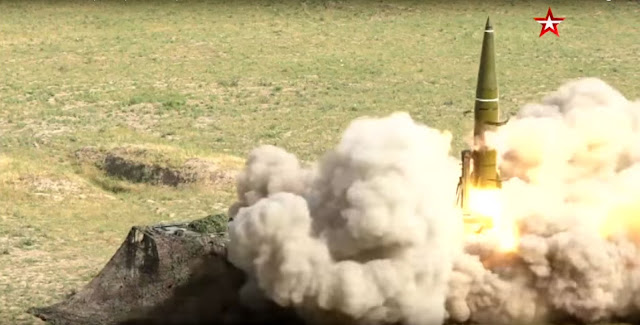 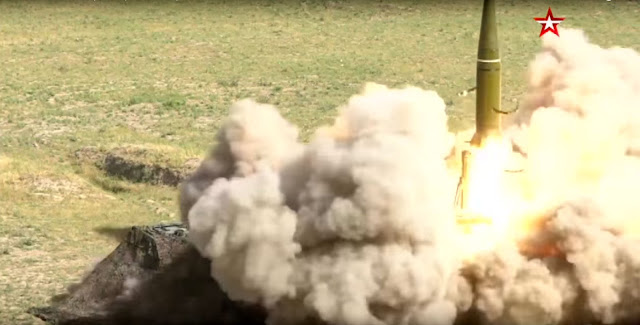 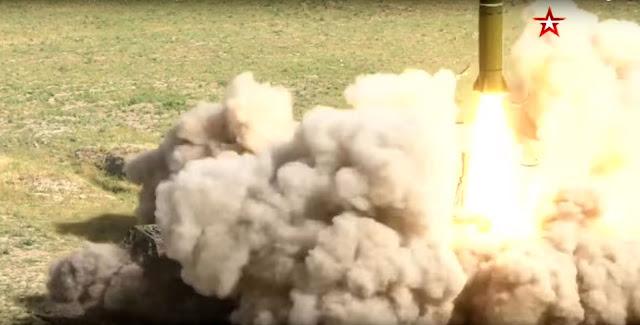 On the shots of the launch, it's easy to see shooting special belts that release the missile at launch. Otherwise, we have an ordinary ballistic missile and its typical launch from the 9P78-1 launcher of the Iskander-M missile system.


P.S. about temporary closed MilitaryRussia site - site are closed untill next week by the reason - one of the publishers required the removal from the forum of site an electronic copies of books that were posted there by forum users. And the hosting provider closed the site with a fright. Now I'm make some documents with hosting provider to prevent such situations from happening in the future. On Monday and Tuesday the site will work again. Sorry.

History of development of the Granit missile

The missile system with an anti-ship cruise missile was developed since 1969 by the Central Design Bureau of Machine Building (TsKBM, formerly OKB-52, now - NPO Mashinostroyeniya, Reutov), the general designer V.N. Chelomey (since 1984 the general designer - G.A. Efremov). The main constructor of the system is V.Patrushev, since 1978 - V.A. Vishnyakov, since 2003, after the creation of the Directorate of the "Machine Building NGO" for the missile "Granit" - A.A.Malinin (2010 at least ). In 2012-2013 Chief Designer of "NPO Mashinostroeniya" in this directorate is Konstantin Danilov.

The development of the Granite missile was a continuation of the development of an underwater launch anti-ships missiles with a range of 400-600 km and a flight speed of 3200-3600 km / h, type P-500P (carrier - PLARK pr.688, project). Most reason was new air defence system of US Navy aircraft carriers by F-14 fighters with Phoenix missiles and multichannel radar. New missiles system was planned to strike at least 20 units by a group of anti-ship missiles to achieve a guaranteed defeat of an aircraft carrier strike group. According to the decision of the Military Industrial Committee under the Council of Ministers of the USSR of April 8, 1966, in the first quarter of 1967, OKB-52 was to submit a missile project under the updated requirements within the framework of the Granit research project. The elaboration of the advance design showed that the missile with the specified tactical and technical characteristics would be about 13 m in length and the solid propellant rocket engine would not be able to provide the required characteristics as a propulsion engine.


Reserch work Granit provided for the creation of an anti-ship missile with an autonomous (without communication with the carrier) choice of the main target in the ship's order (for example, as part of an aircraft carrier strike group) and a universal launch - surface or underwater. The preliminary design of the complex was released in 1969 and approved in 1970. The full-scale development of the missile and the complex began in 1970.


The peculiarity of the developed missile was a combination of achievements in aerodynamics of supersonic flight, materials science, engine building, as well as in radio electronics and computer technology. By the end of the 1960s, the OKB-52 already had the experience of creating systems designed to destroy large surface ships and their formations and in fact preconditions existed for resolving the issue of the guaranteed defeat of an aircraft carrier strike group due to a massive and fully automated group missile strike.

Guided system of the Granit missiles

The missile inertial guidance system with an autopilot with correction working with the self-guidance system, which includes several computers (4 computers), an active radar homing head and an information exchange system between the missiles (SOIR system) of the salvo with several communication channels. The active radar homing head antenna is located in the central body of the engine's air intake. The missile control system and guidance equipment were developed by NII-49 (CRIIT "Granit"). Production of on-board equipment of the control system was began at the pilot plant of the NII-49 / NPO Granit (OAO Severny Press now).

The computer system include 4 computers/ First and second computers ran the program in parallel (processing information from primary converters), the third computer was an "arbitrator" - compared the results of calculations, with mismatch testing was performed and the faulty conputer was turned off. With the addition of the fourth computer, cyclic testing of three operating computers was conducted.

In the missile guidance algorithms was realized the logic of selecting the main target in the ship's order. The size of the targets and the removal of targets from the point of expected target coordinates were analyzed. Such an algorithm made it possible to select the largest target in the ship's order. Also they said that guidance system had in her maind images of all general aims and groups of ships. Later, a similar algorithm was used on the Vulcan anti-ship missile.

In case of group of missiles, after the detection of the target with the missile radar (radio-location sighting), the target distribution is achieved using the SOIR-system according to the target type introduced at the start-up. After determining the coordinates of the targets assigned to the target distribution and their movement parameters, the missile with the radar turned off decreases to a low altitude and makes a flight to the point of the supposed target coordinates. When approaching the point of assumed coordinates, the radar target (target) is activated and the target is captured. Each missile goes to its goal according to the previously conducted target distribution on an individual trajectory with the possibility of speed maneuvering, which allows striking a protected target simultaneously with several missiles from different directions.

The distribution of targets between the salvo rockets is carried out using the information exchange system between the rockets (SOIR) on several algorithms, created using the theory of games in the Central Research Institute "Granite". Through SOIR was the exchange of radar homing heads of missiles, coordinated the strike order of the missiles, depending on the scheme of strike. The control system of the complex on the side of the carrier makes it possible to carry out salvo firing with all loaded missiles.

The target seeking for the complex made by carrier, either by means of an aviation or space targeting system. The aviation complex for designation "Uspekh" ("Success") was used with the use of aircrafts Tu-95RC or Ka-25C helicopters. The space complex for reconnaissance and targeting of the "Legend" was created with the direct participation of Academician Keldysh at the stage of theoretical elaboration.

Also missile 3M45 Granit was equipped with a electronic defense system developed since 1965 in the laboratory of the department of the 25th CRIIT "Granit". The main component of this system was the station for generating active jamming 3B47 "Quartz" developed at the Taganrog Research Institute of Communications. The missile can perform anti-ship maneuvers.

Main and general source is article about Granit system at MilitaryRussia.Ru: